In preparation for our Annual Conference later this week, I’ve been hitting the conference’s web site more often than usual to try to keep myself aware of anything coming up. But I was excited Friday when I noticed that the lead story had to do with my favorite rock band of all time, U2!

“The crowd exceeded their wildest expectations at Quincy Union UMC in Quincy (IL), when, in cooperation with Melrose Chapel UMC, they hosted the city’s first U2Charist.” 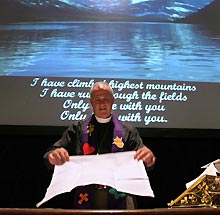 U2Charist is a communion service, or Eucharist, accompanied by U2 songs instead of traditional hymns. U2charist was designed by Sarah Dylan Breuer, a contributor to the book Get Up Off Your Knees: Preaching the U2 Catalog. The first service of its kind was held in Baltimore, Maryland, in April of 2004. Apparently it has finally found its way into the United Methodist Church – and even into the Illinois Great Rivers conference!

It’s this kind of thing that renews my faith in our church… not really, but I really like it & it sounded like the right thing to say! :)

3 thoughts on “Gloria… in te domine”