It’s been a while since I’ve posted a “double M” but I’m feeling very miscellaneous today. Maybe scattered is a better word. Or unable to focus. Regardless, here goes; 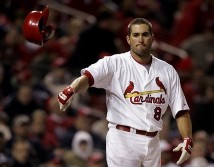 My team seems to be waning. After dropping two of three to the Phillies this weekend the Cards are six games behind the improbable Cubs and one behind the team I thought was going to run away with it, the Brewers. I know Yogi, it ain’t over ‘till it’s over. But I’m starting to get that gut feeling when I watch them play now. It’s almost painful, even when they have a small lead. Heck, especially when they have a small lead!

But this is baseball! The sport where the expected almost never happens. The Cubs could have a historic collapse like the Mets did last year. Or the Cards could barely scrape through the regular season and dominate the playoffs circa 2006. But (and I’m sorry to all the other, more optimistic fans out there) I’m not holding my breath.

A Kitchen in Disarray

The kitchen remodel moves forward this week. We emptied out all of the cabinets last night and I just got off the phone with my wife who said that they are completely gone now. The “they” in that sentence refers both to the cabinets and to the guys who ripped them out. She’s not sure where either is now, but they’re not in our kitchen. I should probably feel some sort of loss or apprehension about this endeavor, but I don’t. Maybe it’s just because the wife seems to be feeling enough of it all for the both of us.

You may have to put up with a few pictures on here in the coming days since this project is completely disrupting our lives right now. Maybe I should apologize in advance.

New photos of fifteen year old superstar Miley Cyrus showing off her underwear are circulating on the internet! …Again. The buzz from the last time was starting to grow silent, so she had to do something to get our attention! Is anyone surprised? Not hardly. Does anyone care? Unfortunately so many people care so much that the sites hosting the shots can’t keep up with the bandwidth. She’s fifteen for crying out loud. Our society is going to hell! And don’t start with the whole “train-wreck” theory that you want to see them just so you can look away in disgust. It doesn’t fly with me.

Did you know there’s a war going on? Gas prices have dropped to under $4 gallon and we think we’re getting some sort of sick bargain? Crazies are kidnapping their own kids and killing each other at alarming rates? But somehow the top “news” stories are about Miss Cyrus, Brett Favre and the Brangelina twins! Did I mention that our society is going to hell? Yeah, I thought so.