Not a real hangover actually. I don’t think we ever even opened a bottle of wine over the holidays, even though we had planned to more than once. But those days off – we really took them OFF. I’m almost embarrassed by how little we did for a few days after Christmas. Sleep deprivation catches up to you fast! It all changed this morning however when I had to go back to work for 2 days and kicked the whole thing off with an over-due dentist appointment. Admittedly, I do get the rest of the week off after tomorrow, but still! I do hope that I am more motivated to get some work around the house done than I was last week!

Here’s my lovely daughter & my youngest niece just prior to gift opening with my wife’s side of the family. For whatever reason, every child in my family makes a big cheesy face every time they notice a camera pointed in their general direction. 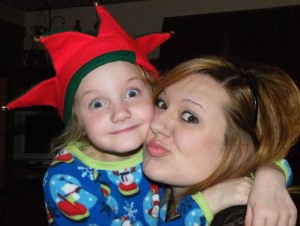 That’s what it’s all about, isn’t it? I love watching the kids; the way their eyes light up, the spontaneous laughter, the excitement & impatience. It’s great. And I have been particularly blessed with the best nieces & nephews around. I have two of each and they’re all wonderful. Even my daughter, nearly drinking age, still gets as silly & excited as the little ones. Personally, I wouldn’t care if I never got another present the rest of my life, as long as I could see the five of them open theirs. They make me happy.

I would show you a picture of the kids from my side of the family at my brother’s house to prove the whole “big-cheesy face” thing, but in true ArachNerd fashion I can’t yet. Although I had bought a brand new camera two weeks before Christmas, and had put the batteries on to charge that morning, I left the camera on my desk when we left the house. And there it remained. My sister-in-law has promised me copies of the ones from her camera, but since I didn’t have a flash drive with me either… well, I’m still pictureless from Christmas Eve.

The gift that was the biggest hit belonged to my two nephews. They each received Air-Hog R/C Helicopters that by the end of the night were being flown around the living room with relative skill. They were entertaining to say the least. Even our grandma thought they were a hoot. I am seriously considering getting one for myself now that I’ve seen them in action.