I have to admit – I was stumped for today’s list. I had absolutely nothing prepared. My dog ate my homework.

Hello inspiration. Where have you been all my life? 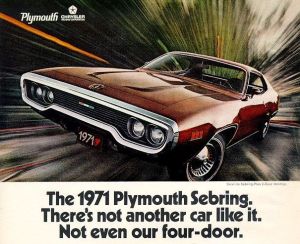 1971 was an interesting year. The world lost both Jim Morrison and Louis Armstrong. It gained Mark Wahlberg, Alison Krauss, Snoop Dogg (Calvin Broadus), the Haden triplets, and Kid Rock. (Probably not a very fair trade-off in retrospect.) The movies Dirty Harry and Shaft made the theaters a little more bad-ass, A Clockwork Orange made it more violent, while Willie Wonka & the Chocolate Factory made it slightly creepy but a lot more fun. It was the year that the World Trade Center and Walt Disney World both opened their doors. Intel released the world’s first microprocessor, creating an industry that provided me a career several years later. The United States banned cigarette advertising from television and lowered the voting age to 18. And, not to strike a nerve or anything, but gas was 40 cents a gallon… Yup. 40 cents!

Oh yeah – it was also the year yours truly was born.

Here are five of my favorite songs from 1971 in no particular order:

(I can’t believe that playlist.com did not have John Lennon’s Imagine, otherwise it would have easily made the list. I’m not saying which one it would’ve bumped off – but it would have certainly been there.)